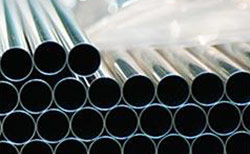 NEOTISS, world leader in welded tubes for Heat Exchangers, will deliver through its joint venture Poongsan Valinox in South Korea, more than 2800 km of tubes in 2015 for the Shoaiba desalination plant.

The tubes will be used to make potable water from seawater at the expansion of the existing Shoaiba Phase 2 Seawater Desalination Plant of Saline Water Conversion Corporation in the Kingdom of Saudi Arabia. This plant supplying potable water to Jeddah, Makkah and Taif is strategic for the country. The new unit is a multi-effect distillation-type desalination plant that will have a daily capacity of 91,200 cubic meters.

NEOTISS has long experience in supplying titanium tubes for desalination applications with more than 25,000 km of tubes produced, including tubes for the last biggest desalination projects such as Ras Al Khair, Yanbu 3 and Ras Abou Fontas. With 600 employees and 5 locations worldwide, NEOTISS produces stainless and titanium welded tubing which is used in heat exchangers for the power generation, desalination and chemical/petrochemical industries.